I helped out in the afternoon with a SISKA clinic with Wayne Horodowich. It was a beautiful day and participants were learning and practicing their braces. The clinic went well and the water was still green. I got to try the toksook paddle again after 8 years - not bad - much better than I remember. I collected a sample of green water to look at under the microscope at school!
I'm of on Tuesday to Johnstone Strait and the broughton group for a 6 day trip with some of our grade 10 students.
3 km, YTD: 401 km
Posted by Mike J at 4:46 p.m. No comments:

Dan, Paulo and I went out for a short afternoon paddle around Chatham Island. I was keen to test the new hood that Paulo had put on my Comfort Paddling Tuilik. At the end of the paddle we did a bunch of rolls and the new neck seal is much better - barely a drop after multiple rolls. Caddy Bay was bright green with algae again - just like last year. 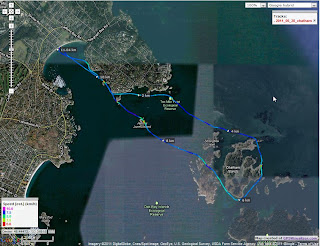 I joined several other SISKA instructors for the afternoon portion of a clinic with Wayne Horodowitch of the University of Sea Kayaking. We had a very productive afternoon learning about vearious stroke progressions. I also got to do my first test of a Northern Light 3 piece Greenland paddle (I have one on order...). Wayne is a great instructor and I also enjoyed his evening presentation on leadership. BTW, Caddy Bay was green with algae again, not quite as much as last year but visibly green! 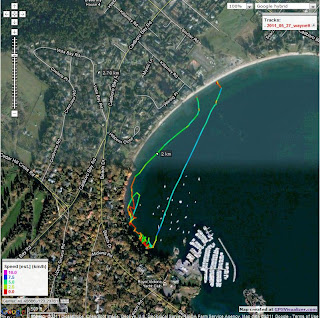 I co led a trip with our grade 11 students from Ladysmith to Portland Island. As I had to get to work on Tuesday, I left them behind at Portland and made my way to Swartz Bay.
We began the trip in drizzle in Evening Cove, near Ladysmith and paddled over to Thetis. Unfortunately the gap was dry and we had to do a short portage. We then went over to Reid Island where we saw a beutiful flower covered island that we decided not to camp on ( a combination of probable habitat damage and dificulty beaching kayaks). We made our way south to Chivers Point on Wallace which remarkably only had one other group there so there was plenty of room for us. An 18 km day. The next day we made our way south to Prevost Island by way of a stop at Walker Hook. The wind picked up a little bit in the afternoon, slowing down our progress. Camping at Prevost was excellent. A 19 km day. On the third day the group made its way to Arbutus point on Portland Island. We made excellent progress, arriving at Arbutus point (15 km) by noon. Peter paddled out to Arbutus point to meet me and we paddled on back to Swartz head (8 km). The rest of the group will make their way to Tulista Park on Tuesday.
Conditions were great, the group was great and I was working with two other wonderful guides Toni and Nick.

James, Dan and I went for a rolling session in Loon Bay. A nice calm sunny afternoon. All three of us were in Tahes. We stopped by the yacht club on the way back to visit with the SMUS sailing group and show them some rolls. James did great and was able to go all the way to reverse sweep rolls and even an elbow roll! Made me jealous! 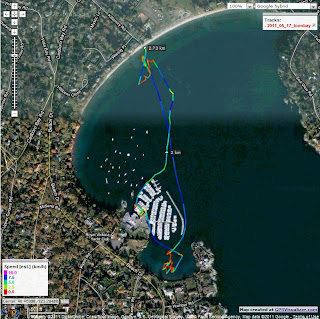 I went up to the Ladysmith Paddlefest on the Saturday to give a towing clinic and then participate in the grand opening of the BC Marine Trails Network. I joined a flotilla of almost 100 paddlers paddling from the Dunsmuir Islands across back to Transfer Beach. It was an impressive sight as shown by the photos John at Kayak Yak took.
Here is a link to John's album: http://www.flickr.com/photos/spuzzum42/sets/72157626596809711/ (me at the left in the Tahe Greenland)
The weather held all day Saturday and I was able to head out for a nice paddle around Sharpe and Coffin points with Scott and Mark. It was a great day to be a part of - celebrating the Trails Network opening. I saw several old friends and met many new ones.
On Sunday Alan (from Campbell River) and I put on a rolling demo around noon where we did a good collection of Greenland competition rolls. I think it looked pretty good as I had several good comments about those kayak ninjas out there. Alan was paddling Dan's Tahe Greenland T so we were in almost matching boats and otherwise black outfits.Unfortunately for the vendors it was raining steadily most of the time (not a problem for rolling!) but I had a bit of time to wander through exhibits. I saw a Pungo (but did not paddle it - intermediate paddlers only!) but did get a shot of myself (Thanks Nikki!) in a Jackson Kayak! I test drove a couple of new Maelstrom/Boreal boats the Vaag 174 and the Vital 166. These wer both very comfortable and easy to maneuver and were a blast to roll - dare I say almost as easy as my Tahe!
All in all a great weekend - and thanks to Mark and Christine for theior hospitality on Saturday night! 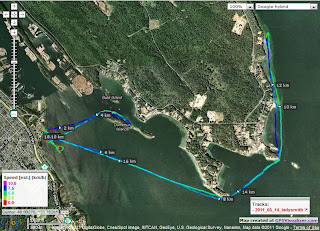 Paulo and I went out for an evening paddle in the Bay. I was trying Dan's Tahe Greenland T and Paulo was trying mine. I was also testing out a new tuilik hood design of Paulo's - worked very well. Off to Ladysmith for the paddlefest weekend. 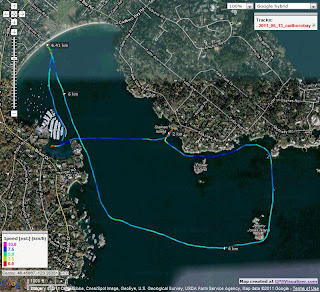 Monica and I joined the SISKA relaxed paddle from Sooke River Campground (where we had held our second annual club campout). Conditions were nice and we were 17 paddlers. There was a bit of wind, but not enough to cause trouble.

11 km, YTD 359
I probably put a km or two in addition to the above while hunting ducks and running some paddling clinics at the campout...

Dan and I went for a rolling session in the bay - first real rolling session of the year. Most rolls worked out OK, though a few need some finesse! It was good to practice again!
Standard and chest sculls, standard and reverse sweep rolls, butterfly roll, armpit, crook of arm, behind the neck, storm and cross arm rolls, norsaq roll, hand and pebble rolls. Tried an elbow roll but just ended up in a body brace. All of them worked fine on both sides. 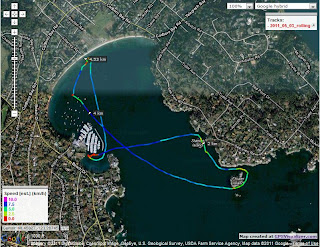 Monica, Jack, Mary and I went out for a lazy Sunday afternoon paddle to Cattle Point. It was sunny and calm and a delightful paddle. Nice view of Mt Baker and even Mt Rainier was visible in the distance! 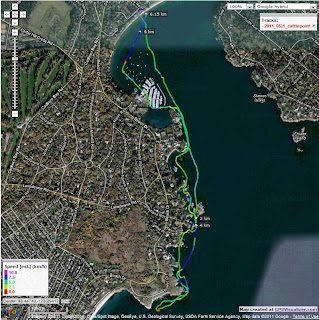