Dan twisted my rubber arm and I decided to go for a short morning paddle so as to clear my head for grading and report writing - it sort of worked! Paulo, Dan and I set out from Killarney and paddled out to Chatham. We poked around islets and went through many normally impassable passages since the tide was high. We also went into Cactus Islet Inlet and checked out the cacti that still seem to be alive after their inundation by a winter king tide. We stopped by 10 mile point so that Dan could check out the seal on his new Tuilik by Comfort Paddling.
On our way in we ran into Daniel, Patti, Yves, Michel, James and Mac who were heading out to play in Baynes.
This was also the first time I had taken out the "new" Cape Falcon F1 that I had traded with Gerhardt for the Disko Bay. It's a bit bigger than my other one, but paddles nicely. 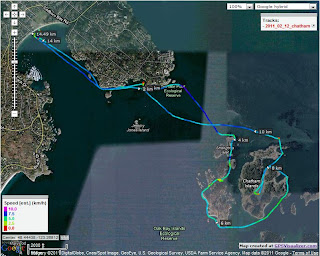