Pete, George and I set out from Cougar Creek where we finished our trip last year and had the intention of paddling to Port Renfrew if conditions etc permitted us before the 28th. Our trip was a great success as we accomplished our goal and had a great time, seeing many wonderful places. Pete and George were paddling CD Siroccos and I was paddling my recently purchased CD Expedition. My GPS stopped recording our track part way, though it functioned fine otherwise, so I don’t have a complete track log to post

. Our route can be seen in my prvious post at: http://www.islandnet.com/~mjackson/pblog/2007/07/summer-trip-plans.html

I will post some pictures soon… in the meantime, I have posted a selection of the images to Picasaweb at: http://picasaweb.google.com/mhjackson123/WestCoastVancouverIslandTripJuly2007


Some video clips are on my youtube site at: http://www.youtube.com/mhjackson123

Number of moving hours according to the GPS: 50h 15 min

George’s son John helped us drive our kayaks and gear to Cougar Creek in Nootka Sound, where we arrived around 2 PM in the pouring rain. We decided to head out as the sea was calm and we made it all the way to Escalante Point on the Hesquiat Pennisula. By the time we got there the wind and the rain had picked up a bit and we were pretty wet and cold, but we got our camp set up and had a good dinner. We met a nice couple who had been on the Escalante Point beach for a few days with their two grand kids (7 and 9 years old – impressive!). They left the next morning before the winds built up. My rudder cable separated at the crimp and so I was without rudder for the last bit of the trip.

We spent the day at the beach, enduring the wind and the rain as we put off trying to make progress around the Hesquiat until conditions improved. We did manage to walk around a bit - down the beach to the beautiful Escalante River and also along a forest trail. In the afternoon we met a group of four paddlers who were heading from Friendly Cove to Tofino over the next ten days. They went on to Barchester Bay. I was able to fix the rudder and recrimp the wires (I had not done a good enough job in the first place!) with George’s help.

We decided to move about 5 more miles down the coast to Barchester Bay so that we would be a bit closer to Estevan Point for rounding the Peninsula. We fought a bit of a headwind and current for most of the 6 mile trip in a fairly rough sea. Still raining. We were escorted into the bay by a grey whale and then greeted by a black bear who proceeded to amble down the beach and back into the woods. The next day’s forecast was improving, so we readied ourselves for an early start.

This was the first day where we had a decent forecast, so we made an early start and set out for Estevan Point. We had relatively calm seas and the weather gradually improved until we were in sunshine by the time we took a break near Anton’s Spit. After Anton’s spit we made a bee line for Hot Springs cove and found our way to a delightful little cove on Mate Island. Since our gear was all wet from our days on the Hesquiat, the beach looked like a yard sale for a few hours after we landed. I cooked up a Thai red curry with chicken and potatoes which was no too hot!

We left early and had rainbows off shore to greet us as we left Mate Island. We headed straight for Rafael Point and around to Siwash Cove. Our first shore break was at Bartlett Island in Clayoquot Sound. We again had some nice tail winds so I was able to use the sail. We made our way past Blunden Island with a nice tail wind, around Ahous Point and down to Medallion beach. I tried trolling for salmon between Ahous Point and medallion beach without success. I took a couple of video clips. A small guided group joined us on Medallion beach.

Links to the video Clips:

This was probably our hardest day. We started at 6:30 AM in fog and basically paddled from Medallion beach on Vargas to the Gowland Rocks in thick fog. We made good use of our GPS and kept a good ear out for fishing boats on their way out. The fog paddling was not fun… We rested for a while in Schooner Cove and then set out across Wickaninish Bay and past Long Beach. The water off Quisitis point was a bit confused and quite fun to paddle in. From Quisitis to Florencia I used my sail and paddle to it’s “max” and maintained about 5 knots or more to Florencia Islet were I waited for George and Pete and we had a rest. The stretch from Florencia Islet to Francis Island off Ucluelet was exciting as the tail wind was building. Pete had a grey whale surface withing boat length! By the time we rounded Amphitrite Point the wind was getting close to 20 knots. We camped at Francis Islet off Ucluelet.

We started a bit later today (7 AM) since we had had a long day before. I discivered after a mile’s paddle that I did not have my VHF so I paddled back to Francis Island and searched for it – I eventually found it in one of my dry bags! So after about an hour’s delay we set of for the Broken group. We had a pleasant breakfast rest stop on Benson Island and then paddled out past Cree Island heading for the Deer Group area and cape Beale. Conditions and the forecast were good so we made a bee line for Cape Beale and had a very nice crossing with a bit of a tail wind. Cape Beale was relatively calm and once we passed the cape I decide to try trolling for salmon – no success but a very nice paddle. We camped in Keeha Bay.

We had another early start with rainbows off shore and paddled around Pachena Point to start the West Coast Trail. From the ocean the trail is magnificent, though there are a few spots were the clear cut logging seems to be a few hundred metres behind the shore (Michigan Creek). We had a wonderful rest and lunch stop at Tsusiat falls and carried on to dare Point were we had thought of overnighting since it was half way. The landing was not geat, so we decided to go on 3 more miles to Carmanah point and we were glad we did. We landed in prtected waters at Carmanah Indian Reserve were we were invited to set up our tents and then come in for beer and a burger at “Chez Monique’s”. The beer and the burgers were excellent (and reasonably priced!) and made a fitting last evening’s dinner. We chatted with a few hikers and had a wonderful evening

We had a lazy morning start, leaving at 10 AM. I got up at 6 (relatively late) and walked down to the Carmanah River camp site to revisit some old memories of a previous camping trip and took a few photos. We met Joe O’Blenis just as we left – he is attempting a record breaking circumnavigation of the island in 21 days! (http://www.geocities.com/outrageous_outdoors/VanIslandRecordUpdates.html). We left him paddling in for a burger at Monique’s!. We had another fantastic day’s paddling along some magnificent coastline. We started to see quite a few fish boats around Culitte Creek. We stopped for a lunch break at Camper Creek – a lovely spot. We had to go and play on the cable river crossing! Between Camper creek and Owen point we explored some magnificent sea caves. We continued on to Owen Point where we picked up a bit of tail wind that allowed me to put up the sail again to finish the trip. We paddled the last section to Port Renfrew were we were met by George’s son John again – who had 3 cold beers for us to celebrate!

George Don and I set out from bretwood ferry terminal to paddle down to Goldstream. We went across the inlet and paddled down the west side and then came back the east side after a leisurely lunch at Misery bay. On our way past Spectacle creek, we found a young swallow floating. We took it on board, gavce it some water and allowed it to dry out in my deck bag. It seemed much better by the end of the day and George took it back to the nature centre. Great weather – I did get a few minutes sailing to test the sailing rig on the expedition at the end – even though I had to back track.

Don and I - the swallow is on my deck bag

the swallow gets gatorade from George

George and his “parrot”

Pete, George and I plan to paddle on from where we ended last summer. We are not sure how far we will get, but it could be anywhere from Tofino to Victoria!

The proposed route is shown below: 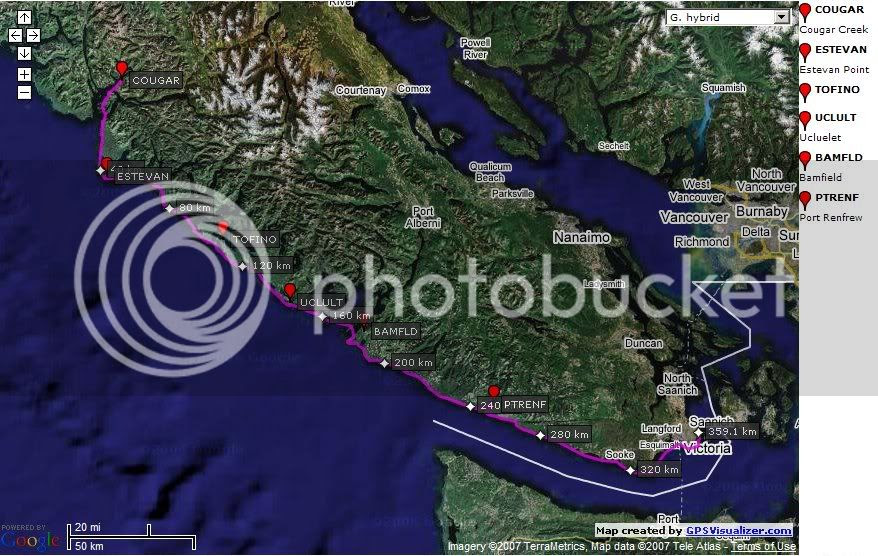 George and I joined the VCKC practice session up at Elk lake and played around and helped a bit. George was working on his rolls and braces. I was taking out my new CD Expedition for its first spin – it is the boat we plan to take out next week on our west coast trip.

David, Marie, Sandy, Malcom, Melissa and I set out from Island View Beach to paddle around Darcy. There was a bit of a breeze from the south, but not too much so we had a great day’s paddle. The breeze was behind us on the way back which made for a quick ride (some surfing) and a chance to use my sail. The winds were ranging from 5– 10 knots mostly with gusts to 15. (see the kelp reef reports below).

The wildlife sighting of note was a brown pelican – the first time I have seen one up here! 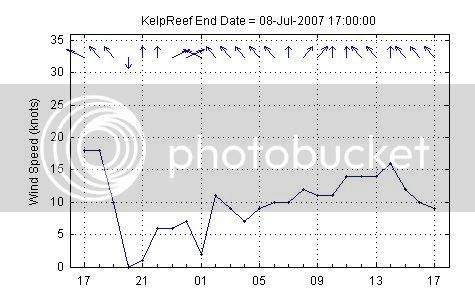 Pete and I set out at around 7:30 PM for a quick paddle from Telegraph Cove to Cormorant POint and back. It was abeautiful evening and we had a great paddle.

George and I went to Elk lake to join the VCKC Thursday night practice that Neil organised. Great turnout and a nice chance to practice some strokes and rolls in warm fresh water! I did not use my GPS (!) so estimate 1 km paddled during the 2 hour session.

Monica, Jenny and I paddled out to d'Arcy Island from Island View Beach for an overnight camp. We had beautiful calm conditions and the camp site to ourselves. Bill and Heather paddled out later to join us. I tried to paddle back to IVB to meet them, but somehow missed them completely – hard to believe one can miss kayakers crossing such a calm section of water! On Sunday morning I paddled out to Kelp reef – to see all the weather station gear – and there was quite a current. The paddle back was uneventful and pleasant, by way of Little d'Arcy and Sallas rocks. On the trip we saw porpoises, raccoons, eagles, guillemots, oyestercatchers, rhinoceros auklets and seals. jenny and I paddled the Passat G3 and Monica paddled the Shadow.

My/Our track – you can see I was going pretty fast on the way to kelp reef – over 13 kph!

Some of Monica’s shots:

the beach at d’Arcy