Ed and I went for a nice morning paddle around Cadboro Bay. Ed is out visiting from Lethbridge where he does not get many paddling opportunities at this time of year! The weather was sunny and cool - magnificent! There were a few other paddlers out and a good number of dinghy sailors in the bay. There was a strong ebb happening at Cadboro Point and the tide dropped dramatically during our paddle.
8 km, YTD 232 km

(This is a long post as I am inlcuding the whole trip with 10 paddles in it!)
Monica and I went to southwest Florida for a two week spring break trip and managed to get several great paddles in. We packed the two Feathercraft Wispers into their bags and checked them in as standard 50lb bags - ended up costing us $20 per boat extra each way for the second bag. Our trip focussed on manatees and birds which we saw in good numbers. The land in Florida is FLAT, and the inshore waters are shallow. Most of our paddling was in 5 ft or less of water. The Wispers were great boats for this trip, giving us light comfortable and familiar boats to paddle which could be kept in the trunk of the rental car or carried on the roof. We bought a Malone Handirack to carry the boats on the roof, and it worked reasonably well once we had good bow and stern tie downs. I had my 3 piece Northern Light Greenland Paddle and Monica had a 4 piece Feathercraft paddle.
We basically had no fixed plan for the trip, flying into and out of Fort Lauderdale and we rented a full size car for the whole trip. No hotel bookings were made except for the last night. We drove straight to Cape Coral by way of "Alligator Alley" to pick up the Malone Handirack and the owner of the store recommended that we stay in a small place in Matlacha by Pine Island. We thought we might spend a couple of nights there, but ended up spending 4! We went for a nice day paddle to the west of Pine Island, as well as a couple of forays into Cape Corals canals where we managed to see a few manatees and some good birds. We also made a morning trip to Manatee Park in Fort Myers where the manatees take advantage of the warm waters coming out of the electric power station.
After Matlacha we went north to Crystal River in the hopes of swimming with Manatees. On our first attempt we took a tour, but the weather had been warm and there were three smallish dozing manatees by the spring. We decided to try again the next day (the night before was cold!) on our own, using the kayaks and had much better luck, getting to swim with our "own" manatee for a while. After that, we decided to head south to Everglades City where we stayed at a great lodge called the Ivey House. Again we thought we would stay a couple of nights but ended up staying four! The folks at the Ivey House were super friendly and helpful. On our way south we stopped for lunch at the Manatee Viewing center run by Tampa Bay Electric - we saw more than 40 manatees taking in the 29 C (85F) water.
The Everglades were spectacular with their mangroves and saw grass prairies, and we managed several paddles as well as a "ten thousand Islands boat tour". In addition, my friend and past student, Martin , came down to Everglades city with his flats boat and we had a great day on the water - the highlight was Martin hooking a 60 or so lb tarpon!
After Everglades city, we made our way to the Keys (stopping at Shark Valley for a 15 mile bike ride) for a couple of nights, staying in Key Largo. The wind was pretty strong for the time we were there, so we did not do any snorkelling or as much paddling as I would have liked. We tried to drive out to Key West, but got fed up with the traffic and turned around at Big Pine Key - after checking out some key deer.
For our last day we decided to leave the Keys and check out the Flaming area of Everglades park and had a great day of bird and gator watching.
All in all, the trip was all we hoped for and we saw more wildlife than we expected (lots of manatees, lots of alligators and well over 60 bird species), had some nice paddling in warm water and weather, and ate lots of tasty fish (grouper and mahi mahi).
Below are all the paddle write ups:

We paddled around Matlacha Island and spent some time looking for manatees in Sirenia Park as well as exploring some mangroves. 11 km

Monica and I went to Manatee Park in Fort Myers were manatees were gathering in the warm waters around a power station - this was the first time we had come really close to manatees! They are BIG! We rented a double from the park concession for an hour! 1 km.

Monica and I went for an early paddle over to Cape Coral again. This time we saw quite a few more manatees as well as a dolphin. 10 km

Monica and I paddled to the springs and had our snorkelling gear with us. We hopped out of our kayaks, tied them up and went for a great swim with the manatees! 5 km

Monica and I joined a ranger-led paddle with a couple for Germany and another from the Netherlands. 8 km

This ended up being our longest paddle, and it was quite warm so were tired by the end of the paddle! Lots of mangrove tunnels but not much birdlife. Fortunately we had a good map as it would have been easy to get lost! 14 km

I went for a solo paddle and joined up for a while with a group from the lodge. There was a large rookery of ibises and egrets near the start of the paddle which became very busy at the end of my paddle just as the sun was setting. As I paddled into the first mangrove tunnel, I was startled as three alligators splashed to escape! While I was on this paddle, Monica went back to the Marsh trail that had probably the best birding of the trip the nigh before. You can see both the mangrove channels and the sawgrass prairie in this image. 5 km

Monica and I decided to go for a protected paddle in the mangroves of Largo sound out of the state park. It was fun exploring the mangrove channels. A highlight of this paddle was finding a small bay with dozens of upside down jellyfish! 8 km.

This was my last paddle of the trip and a chance to explore the keys a bit. I went on my own as it was quite windy. You can see the Intracoastal waterway rout quite clearly in the image. I saw a few of the usual seabirds and a small shark. On the way back from Shell key, the waves were big enough to surf a bit! 10 km.

I led a group of 20 SISKA paddlers from Oak Bay Marina around to Trial Island and then back out to the Chain Islets after a lunch break at the golf course. Conditions were good with the wind between 5 and 10 knots most of the time and the sea rippled for most of the time. The current turned to flood sooner than I expected, so there was a bit of current around Trial Island. It was great to meet some new paddlers and reconnect with many friends!
15 km, YTD 139 km (8 NM)
Posted by Mike J at 6:45 p.m. No comments:

Dan and I went for an after work afternoon paddle around Chatham and Discovery. Conditions were good, with a moderate ebb in Baynes Channel that made some small waves to play in off Cadboro Point. We decided to put in some extra distance in this time with a figure of eight around the islands. I was a bit out of shape after not paddling for a couple of weeks! 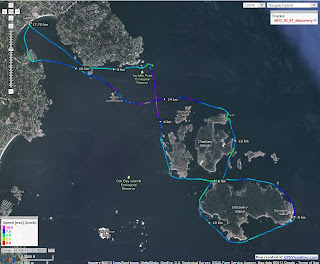