Monica, Bill, Sharon, Heather and I went for a nice relaxed paddle into Tod Inlet. Conditions were overcast but nice and calm and we had a great "family" paddle. Sharon had one of my Wispers and Heather had the F1. We did some harpoon practice with a Scotty pump masquerading as a seal target... I need to practice a bit more to get some range. We also discovered a weird phenomenon whereby Heather was able to move both boats forward by pushing back and forth on my tahe... not quite sure why we were able to make progress!
7 km, YTD 433 km
Posted by Mike J at 3:30 p.m. No comments:

Dan Paulo and I went for a quick Sunday jaunt around Discovery. I think our average speed was close to 4 knots (pretty much all blue on the track plot). We went round the "opposite" way for a change...
Another nice day on the water!
15 km, YTD 426 km
Posted by Mike J at 3:20 p.m. No comments:

This weekend was the SKGABC guides exchange and it was hosted in Victoria by Ocean River Sports, so I was able to attend and participate. I did my CPR-C recert on Friday PM and then led a rolling session on Saturday AM in Cadboro Bay with Gerhardt. We had about a dozen participants who all worked on improving their rolls.
In the afternoon I joined a group of 9 that was going to paddle around Trial Island. The original plan was to leave from Oak Bay, so I figured I would paddle from home and meet in Oak Bay. Once at Cattle Point, I discovered that we were meeting in McNeill Bay. So I had a nice extra paddle! There were some nice currents swirling here and there and we saw an elephant seal!
18 km, YTD 411 km
Posted by Mike J at 10:18 p.m. No comments:

I decided to make a quick visit to the Westcoastpaddler.com campout on Portland Island after a day spent up at UVic with particle physics! I left Swartz head at 4:30 and was at Arbutus point in an hour. I spend a nice 3 and a half hours chatting with folks and then, after waiting for the International Space Station to fly over, set off back for Swartz head at around 9 PM. The bio-luminescence was neat and it was a nice change to do a night paddle. It was great to meat up with many friends as well as to meet new friends and very worthwhile the trip out!

Paulo and I went out for a quick afternoon run around Discovery. We finished the 15 km in 2 hrs and 10 minutes for an average of almost 7 kph over the trip. Nice to be paddling in home waters again!
15 km, YTD 379 km.
Posted by Mike J at 6:47 p.m. No comments:

I joined Michel, Pierre and Fern for a paddle in the Chambly area of Quebec. We were visiting the Montreal area and Michel and I are importing Tahe kayaks together. We had a great paddle through le bassin Chambly, the Riviere L'Acadie and the Ruisseau Masse, some canals ,the Richelieu river as well as paddling in the Chambly rapids by Fort Chambly

Here is a video clip from Michel's camera:


and a photo of me taken by michel: 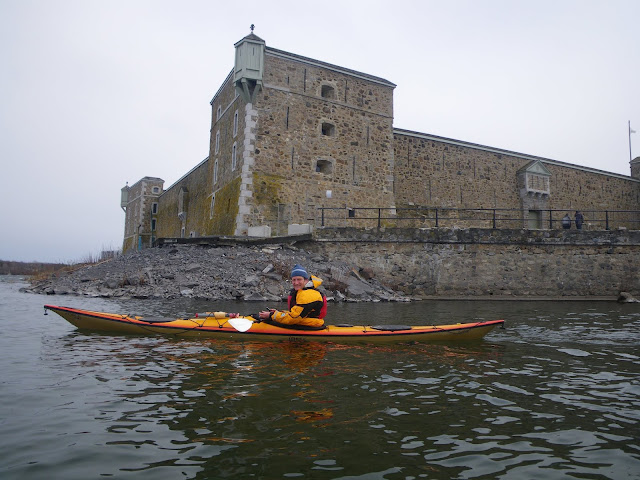 It was great to see some of the Quebec countryside and meet (and try my French on!) some wonderful Quebecers. I was paddling an Impex Force 5 that Michel lent me, which was a nice boat.
We saw quite a bit of wildlife, including muskrat, mink, ducks and gees, two great horned owls, a small black and white woodpecker and more.
We finished the day's paddle with a bottle or two of Blanche de Chambly!
Many thanks to Michel for organizing a great day!

When we arrived at our hotel in Peterborough, Ontario to visit our daughter Claire who is at Trent University, Monica happened to notice a bunch of kayaks in a rack across the street... I had to investigate and discovered Wild Rock Outfitters, a great outdoor store! They also happened to have kayaks for rent, so I had to test out the waters of Peterborough the next morning. I decided to launch the kayak, a Necky Chatham 16, from a park a few blocks away and explored a bit of the Otonabee river and "little lake". There is so much water to explore in the area! I think I will have to come back with my own kayak! There are plenty of rivers, canals and lakes...
7 km, YTD 342 km
Posted by Mike J at 8:53 a.m. No comments: