Ater our Kyuquot trip, we figured that we were far enough up island that we should do a trip in the Broughtons, so we took Natural C-lection  for a 6 day cruise amongst the islands and channels north of Johnstone Strait. We had our two Feathercraft Wispers on the boat's roof rack and found that the boat and wispers worked very well as a "mothership" system. We managed to get in 5 paddles during our 6 days. I had previously paddled as far as Echo Bay with the SMUS experiential groups and it was neat to see some of the areas further afield.We were blessed with decent weather and minimal winds throughout our trip.

Monica and I anchored in Growler Cove and launched the Wispers for a paddle out to the Sophia Islets.This was our first attempt at "mothershiping", and it was very successful (except that I forgot my GPS!)

After a foggy morning in Blackfish Sound and a visit to the earth embasy on Hanson Island, Monica and I went to Village Island to visit the abandoned village of Mamalilaculla on Village Island. I had been here several times with the SMUS groups and it was good to see this spectacular sight again. Quite reminiscent of places we saw in Haida Gwaii.
2 km, YTD 770 km

After a night in Echo Bay marina, we went to the Burdwoods for a paddle. We had the "kayaker beach" to ourselves that day, shoretied the boat with our anchor buddy and went for a nice paddle around several of the islands in the group. The camp site is an excellent one. The seals around here seem much darker than in Victoria. 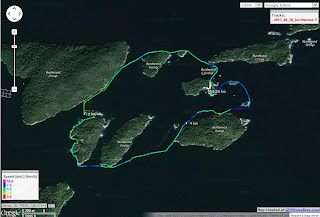 After spending the night in Watson Cove and going for a short hike to see an old cedar we paddled back to look at Lacy falls again close up. These falls are very pretty. we noticed that the flow was noticeably less this morning than it had been the afternoon before.

At the recommendation of Anca and Max of Kwatsi Bay Marina, we went into Booker Lagoon at high slack, set our prawn trap, found a private cove and then went of a paddle to explore the lagoon. I went a bit further than Monica and chatted with another boat (Y-Knot) that was anchored in another cove on the SW arm of the lagoon. The prawning was successful and we had an amazing bear watching experience after dinner in our cove. A sow was teaching her two cubs to turn over rocks for crabs and such. They were only a couple of hundred feet away from us and completely ignored us for about an hour!

Monica and I took the C-dory (Natural C-lection) up to Fair Harbour and met with JF. Our plan was to go out to Spring Island and try our hands at kayak fishing based out of the West Coast expeditions base camp. We took the Delphin and the Trident Angler. Spring Island and the WCE camp were magnificent and we had a great few days there in spite of some windy and rainy weather. It was great to see Dave and Caroline again and meet Morgan as well as guides Serina and Ben. We also ran into Mike P and his son Rowan! While at the camp, we got to meet Dave's Kyuquot "family" which was a real treat. There are some protected waters on the NW side of the island which allowed fishing to happen even when it was a bit nasty off shore. There are plenty of nice springs around! Monica and I fished out of the C-dory a few times and had some good results!


August 13 - Round Spring island with Monica

Monica and I went for a paddle around Spring Island together. Conditions were great with minimal swell, sunshine and spectacular scenery. Lots of sea otters up here.
8 km, YTD 743 km

August 14 - playing in waves with Ben

The 14th was pretty stormy, and the swell had built up so when Ben paddled by saying he was going to play in the waves, I jumped at the opportunity to join! It was my first time surfing in kelp!
10 km, YTD 753 km

I took the trident out and tried trolling and handlining. I had no luck, but JF hit springs with his bucktail and a trolled hootchie.
7 km, YTD 760 km

To and fro from the boat

Dan, George and I went for a morning paddle around our favourite islands. Conditions were good with a reasonably strong current. good chats as always and nice paddling!
16 km, YTD 735 km
Posted by Mike J at 8:12 p.m. No comments:

I joined a group of 6 others for a one day workshop with Cheri perry and Turner Wilson of Kayakways, organized by James Manke of Qajaq.ca. I set out from the Langford Boat ramp and paddled over to Martin's place where the event was taking place. We spent the morning working on strokes, with a particular focus on paddle cant. I found this intriguing, but am not yet convinced that it will work for me! We spent the afternoon on rolls, and I was able to learn a new forward finishing butterfly roll and at the very end figured out that I can do the elbow roll (video) fairly consistently if I slide myself far enough forward in my cockpit! I also made good progress on forward finishing norsaq/hand rolls and have some exercises to work on!
We finished the day off with a nice dinner followed with games!
5 km, YTD 719 km
Posted by Mike J at 8:41 a.m. No comments:

Pete and I went for a paddle over to D'Arcy Island on our way back from dropping off some school boats at Blackline. Conditions were great with just enough wave action to make things interesting but not hard work! We set a good pace and were able to do the round trip in 3 hours including a nice lunch spot on the deserted beach. It was good to paddle again with Pete as we have not done so for a while. 15 km, YTD 714 km
Posted by Mike J at 3:12 p.m. No comments:

Monica and I went down to the Inner Harbour to watch the Symphony Splash. I joined, Tom, Willow and Ailsa (a student of mine from 1987!) as kayak donations volunteers, soliciting donations and "selling" glow sticks and such. Just as I remembered from two years ago, this was a great event. The music was magnificent, and the ambience was spectacular. It was neat to see another past student Adam Sawatski emceeing the event. The view of the event from a kayak is spectacular - probably the best seats in the house! I saw several other SISKA members (Joanna, Jeff), CBSA members (Bob) as well as colleagues (Rea, Whitney) and past students (Andrea, Ann). We launched at the James Bay Anglers ($5 launch fee or $25 annual membership) and paddled our way around to the Splash area. I did a lot of paddling back and forth talking to people and asking for donations and probably collected over $200. It was also really neat to see the son of good friends of ours, Eric Manning, perform a piano solo and their other son Philip playing for the orchestra. In addition,Bill was on the stage at the finale piping with the Canadian Scottish.The 1812 overture finale was truly spectacular and powerful with the pipers, cannons and fireworks. A wonderful evening. My GPS batteries were low, so I did not get a track...I estimated 6 km, as that is what I did last time This is a link to the track image from 2011. Once again the Kayalu kayalite deck lights worked very well ( I got mine from Joe O a few years back, and he still stocks them..
5 km, YTD 699 km

The Kayalite deck light
The actuial track plot from the time the GPS was on... The battery quit at around 7.