Well - one more post from an Internet cafe in samara Costa Rica!
Monica and I went for a short paddle out of Samara Costa Rica. We went out from the beach to some islands at the edge of the bay. It was a bit windy and the sit on top "ocean kayaks" were not very hydrodynamic! probably paddled about 8 km
YTD 1098 km???
Posted by Mike J at 6:37 p.m. No comments:

28 others and I joined a VCKC xmas paddle from the CFSA sailing club beach to Millstream and then for lunch at 6 mile - a bit of wind and rain, but fortunately none when we were loading or unloading boats. the worst was when we were in the pub!
8.5 km. YTD: 1090 km
BTW, this is the last paddle post of the year as we are off to Costa Rica today!
Posted by Mike J at 10:35 a.m. No comments:

George, Roscoe, Dennis and I set out from Cadboro Bay in snow, but this dissipated and turned into a fairly typical winter’s day – light drizzle, cool temps and 5–10 knots of wind. We had a nice paddle all along the shore from Cadboro Bay to Horseshoe Bay by Finlayson Point where we stopped for lunch. I managed to put the spirit sail up for a while on the way back across oak Bay.

The weather was so miserable today that I settled for a 2 hour evening pool session to practice my rolls and braces. Had fun rolling with my GP. I could definitely use some coaching on some more roll techniques and how to better set up for a static brace.
Posted by Mike J at 10:03 p.m. No comments:

George and I joined Dennis, Sue, Lynn and Tony who were heading to D’Arcy to camp. There was a good breeze heading over and I had my spirit sail up for the second half of the trip. George and I had lunch on the island and then headed back to Island View via Sallas rocks. The day was sunny and conditions were good.

Gordin, George, John, Paolo and I set out from Smuggler’s Cove for what turned out to be a beautiful day’s paddle around Chatham and Discovery Islands. The currents were weak and the sun was shining – what a day for November! We had a nice long lunch break, enjoying the sun and solving the world’s problems…

George in his “new” boat

Gordin and John and Mt Baker

Paolo rolls back up

Pete, Jim, George, Lindsay and I joined Craig for a day of white water paddling on the Cowichan. We did a new section of the river to me – From Sandy Bottom pool to Duncan. Nice water at this river level. Quite a few chum salmon seen breaking the surface. I took a good bump to the helmet in one run.

I led a VCKC Energizer paddle from our launch at Gyro Park to lunch on Gonzalez beach and back. It was a beautiful day. We had 18 boats including a double. The currents were with us both ways and we averaged a comfortable 3 knots. I made my 1000 km for the year by lunch which felt nice. A group of us stopped off at the Smuggler’s cove pub afterwards.

George and I set out early to paddle around Trial Island. Weather and conditions were great. We ran into Pete and Andy as we were returning. Coming back, I noticed a nice roche moutonee made by the glaciers during the ice ages.

I joined Ken, Alphons, Bob, and Ralph at Jordan River to spend a couple of hours in the surf. Since it was my first time in a while, the conditions were great – the waves were big enough that I got rides, but not so big that it was “too exciting”. No mileage to record today, though I probably put in a couple of km…

photos shot with my S1 in a housing.

I went out bu myself for a morning paddle to visit the grade 11 group camped at Arbutus point. The wind was around 10 knots from the south and it gave me a bit of a push on the way out. Had a chat with Beth-Anne and Charlie and then headed back home. The wind definitely slowed me down on the way back (see track). Gale force winds forecast for the PM, so I decided to get back early.

Cousin Ginny, Ant and Julia (visiting from Botswana) and I set out from the VCKC beach to paddle down to the inner harbour. Nice conditions. There was a strong ebb as we were heading down stream, but it had almost ended by the time we returned. The Johnson street bridge went up while we were in the harbour.

George and I headed out from Smuggler’s cove for a quick Sunday morning paddle. My GPS did not work today, so the track is created manually on a chart from memory…

Beautiful condfitions and a very nice paddle! No significant current, wind or waves!

Finally managed to get out on the water again! I went out after school on Friday afternoon to join the grade 10 kayak group that was camping on Portland Island. I spent the night with them, paddled twice around the island on Saturday morning and then went back. conditions were great and it was fun to visit with the group.

George has put together a 2minute trailer for our 2006 trip on youtube:

Bill, Paolo and I set out from Wier’s beach near William head and followed the coastline around William Head, Pedder Bay, inside Bentinck Island, Christopher Point, Whirl bay and eventually to a beach by Large Bedford Island. Conditions were nice and we avoided the wind and any flood current by hugging the shore and pokinmg around islets. After lunch the wind had built a bit and the current was flooding strongly. I put up the PA sail and we cruised quickly from the Bedfords to Pedder Bay by way of Race Pasage. Once in Pedder Bay, the wind was at our side and there seemed to be a current eddy pushing us out, so it was slow going from there back to the beach. A very nice day, sunny, breezy but not too much. The winds at Race rocks rose gradually from 15 knots at 10 AM when we started to 25 at 3 PM when we finished.

Bill and some deer

two views of the track

Joe O’Blenis has just completed his record breaking circumnavigation of “our rock” :  23 days and 10 hours – the previous record was 28 days. Read about it at: http://www.geocities.com/outrageous_outdoors/ – we met Joe at Carmanaha point on our last day and I ran into him again a couple of days later on Vargas.
Posted by Mike J at 11:37 a.m. No comments:

Here are some images from the week…

MJ in the wisper with rolling rib installed

Monica in the wisper

A view of Kalamalka and Wood Lakes from Oyama Lake Road

Kathy and Candy on Okanagan Lake

I am posting a “week in review” post with tracks since I sent all the daily posts by e-mail from my pocket PC. I’ll follow with some pictures. 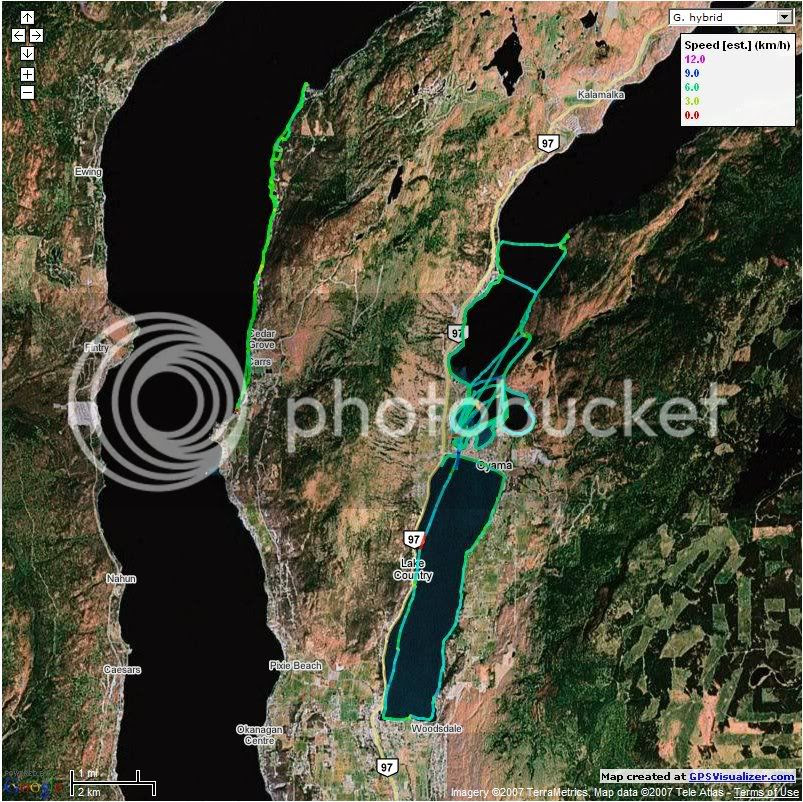 The tracks for the whole week…