Well, having just finished the last paddle of the year it is time to look back at another great year of paddling. This brings my fifth year of blogging my paddles to a close. This year I was happy to have done more paddles than any previous year (124) and covered a respectable 1214 km. I am happy with both of these since my annual goal is 1000 km and since I moved to "Killarney Kayak Base" 100 paddles a year. This year I managed to average a paddle every 3 days. The five year total is 458 paddles and 6046 km - basically five times around Vancouver Island!
The Tahe Greenland continues to be my favorite boat (107 paddles since I got it in June 2009) and most of my paddles are not surprisingly out of Cadboro bay.

A highlight this year was attending the Rolling competition of the Kayak Academy's Greenland week. Thanks to Dan G for helping me do lots of practice - it felt neat to have mastered enough rolls to come 4th in the competition. I am still working on the elbow roll and forward finishing norsaq and hand rolls.

GPS Visualizer continues to be the site I use for all my track plots from my trusty Garmin Etrex Legend HCx.
My paddle of choice remains my Superior Kayaks Carbon Greenland Paddle - at 770g (27.2 oz) it is so light weight and yet so tough. Though it has been my "go to" paddle since the summer of 2008, it still looks virtually brand new. I highly recommend a carbon GP! My favourite paddling wear of late has been my tuilik made by Paulo Ouellet worn over a pair of Kokatat Whirlpool Bib pants unless I plan to roll a lot in which case I would wear a dry suit. My favourite footwear are my NRS Rodeo Socks - which I should look at replacing since they are beginning to wear out!

Happy New Year to all of you and thanks to all who paddled with me this year. I hope to do the same next year!
Posted by Mike J at 3:02 p.m. 2 comments:

George and I set out to finish the year off in good paddling style and we were able to squeeze in a last paddle of the year. I started off in the Tahe and George paddled the Disko Bay ands we switched half way. despite botrh being "Greenland boats" they handle very differently. The OBSR crew was helping Cliff get his boat off off my mooring (see this post) as he now has an outboard that works, and I helped them to hook up a couple of lines. While they were in the bay they found a couple of other boats that were only just on their moorings after all the chafing that has happened of late with the storms. George and I went out to Maynard cove and then tootled back along the shore stopping for lunch in a tiny pocket beach. When we got back the OBSR crew was done and just about to head back to base. It was nice to the boat from a paddler's perspective - looks a lot bigger!

I went to Jordan River with John and Heather. It was Heather's first time in surf and though she swam a couple of times she got some good rides. The forecast was for calm winds but they picked up to 10-15 knots soon after we arrived. I paddled the Wold Surf Kayak with my Terry A Greenland paddle. I also wore my Bughead 2mm tuilik over my drysuit and was very comfortable. I was wearing Hot Mitts from MEC which worked great - my hands were warm and toast throughout the sesion in spite of air temperatures around 2-4 C! I have only had these for a week or so but am now a fan of them. Bill was on shore and hopefully got some good stills and video. I also ran into Randy who was setting out as we were finishing.
5 km, 2 NM, YTD 1207 km
Posted by Mike J at 6:29 p.m. No comments:

Gary, Tom and I set out from "Killarney Kayak Base" for a morning paddle. It was the maiden voyage for Gary's new Tahe Greenland T - a great looking boat. Conditions were nice and the ebb was just starting at Cadboro Point. We paddled up to look at Julian's weather station at Ten Mile Point and then made our way back over to the west side of Caddy Bay and noodled along the shoreline and through RVYC. Along the way we did a fair bit of paddle trading. My Superior Carbon, Gary started with a T&J Carbon and Tom was using one of Kent's cedar paddles (875g). All performed well, though I remain convinced that my Superior Carbon is a fantastic paddle.
Today I reached my revise paddling goal for the year! 122 paddles means an average of a paddle every 3 days which seems decent. It looks like the average is pretty close to 10 km per paddle.
8 km, 4 NM, YTD 1202 km
Posted by Mike J at 7:30 p.m. No comments:

Dan, Dennis and I paddled out to Cadboro Point where we joined up with Gordin. The waves were stacked up pretty well and I had fun punching through them. We ran into and paddled Paulo as well who was getting a quick paddle in before heading to the mainland. The sluice was running well and we had fun playing there - there was even a small wave there to surf on! We stopped for lunch at boathouse bay. The current was running quite strongly. If you look at the route I took ferrying across back to Jemmy Jones, I was pointing probably 60 degrees up current! Once again I was very pleased with how the Tahe performs in "conditions".
18 km, 10 NM, YTD: 1194 km
Posted by Mike J at 2:48 p.m. No comments:

I walked down to the beach to have a look and was inspired by seeing Paula from KayakYak out in her inflatable on the other side of the bay, so I decided to head out for a short one. I managed to catch up with Paula briefly at the other end of Gyro Park and was able to wave at Marke and family as I paddled by their house. A nice surprise was running into Andrew (a student of mine from 1994) who was spending Christmas with his parents. After paddling out to Flower Islet and Evans rock, I made my way back across the bay and then back through the yacht club and the moorage. The ketch that ran aground on Thursday was afloat again. It was a dramatic change to see the bay so calm again after such a windy week. See the plot from Julian's weather station at Ten mile Point 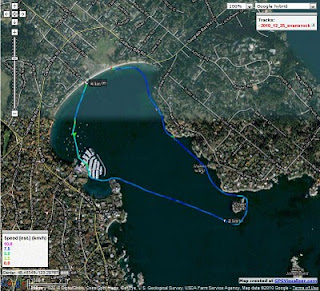 I could not go paddling today as I am on call, but it did not look to inviting anyway. Winds have been gusting up to 48 knots at Discovery Light and have been pretty steadily over 30 knots all morning in the bay.
A few shots from the end of the road: 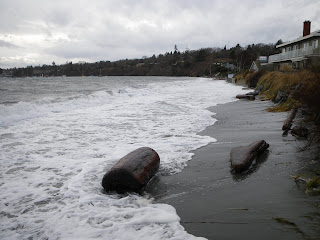 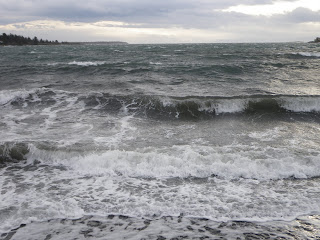 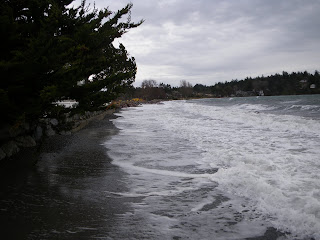 Dan, Gordin and I set out from "rat bay" to paddle around Trial Island and enjoy some of the wind and waves. The winds were in the 20 to 30 knot range for most of our paddle. Trial island reported  a steady 21 knots at 10 AM. Discovery reported similar winds between 10 and 12. Shortly after we came in the wind picked up another notch to 35/40 knots (Trial island 1 PM). Ten Mile Point also reported similar winds (main 10 mile site):

We played around in the "bumps" off Trial, but found more fun in the waves between the two islands. We then paddled over to the cardinal buoy by Mouat reef and found the largest waves between there and Enterprise Channel (we estimate 3 metres or more at times)
I managed to leave my trusty carbon paddle (made by Superior) in my garage - fortunately Gordin (thanks!) was able to lend me his spare. However, I found myself surprised at how much less comfortable I felt with a Euro paddle. The Greenland paddle just seems to be smoother,more efficient, more stable and reassuring in big conditions. To test this I borrowed Dan's paddle at the end and went back into the lumpy stuff to check - no question, the GP felt better..
8 km, 4 NM, YTD 1172 km.
Posted by Mike J at 6:20 p.m. No comments:

I paddled out to Cadboro Point where I met up with Gordin and Dan. We then proceeded to go around Chatham and Discovery islands.. There was a stiff breeze (20-25 kph, gusting to 40 kph) for most of the time. The sea was nice and lumpy around Seabird Point on Discovery and we stopped for lunch in a protected cove north of Commodore Point. I was wearing my "Paulik" again and was very happy with it.This was the first paddle in the Tahe Greenland since Nick of Active Sea Kayaking fixed up the gelcoat - the boat looks almost like new! ( for more details on the gelcoat damage story see this previous blog entry. 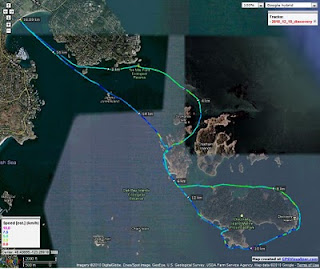 Monica and I joined Bill and Heather and six others (Michael, Joy, Lisa, Diane, Olivier and Liz)  for a "plan B" paddle in Thetis lake. Conditions were sufficiently windy that we cancelled the club's relaxed paddle across Esquimalt Harbour, but a few of us decided to get our boats wet anyway since we had them out! In Thetis lake, conditions were good and we had a nice paddle. 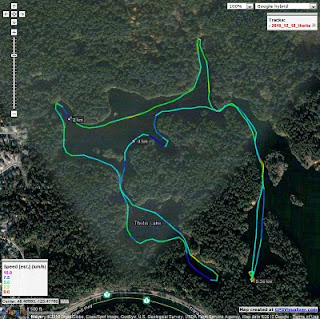 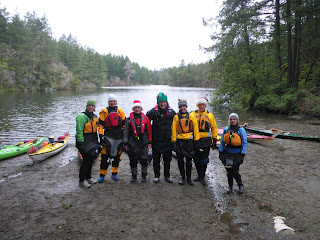 Dan and I went for a relatively early paddle out to Discovery since I had some work to do this aft. We made good time and decided to paddle towards Trial Island. We decided about half way over to go to Gonzalez Point instead and follow the shoreline back. The rain (75mm overnight) abated by the time we were over to Chatham and we stayed fairly dry - except for rolling! 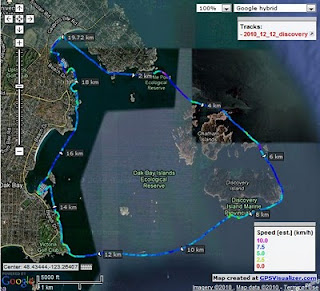 Update on top 50 sites - not so famous

Simon Willis of SimonWillis.net alerted me to the semi scam nature of the "award" I just found out about. Read all about it here: http://simon-willis.blogspot.com/2010/08/fake-blog-awards-and-vanity-mine.html
Oh well, it felt good for a while!
Posted by Mike J at 9:12 a.m. No comments:

I just found out that my blog is listed in Guide to Online Schools' list of the Top Kayaking Blogs - they liked the seal pup posting!:
Though I realize this is a bit of a scam, ...
Posted by Mike J at 8:00 p.m. No comments:

Dan and I went for an afternoon paddle and roll session. Conditions were good - no current to speak of and just a light breeze. We did a good number of rolls but the water was definitely cold on the face! 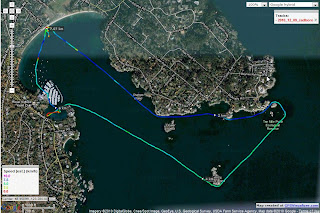 I joined a SISKA relaxed paddle, led by Shelia, from The Gorge at Tillicum up into Colquitz creek. It was a nice change to paddle up a river until it got too small to turn around in - we basically made it to the back of Tillicum mall. It was also a chance to paddle with Randy of VI paddles who is a Nanaimo based Greenland paddle maker. I once again was wearing my "Paulik", a tuilik made with waterproof breathable fabric made by Paulo of Comfort Paddling. Paulo can do a great job of custom work with waterproof breathable fabric.

Dan and I went out for an afternoon paddle in Cadboro Bay. Nice sunny, though cold, afternoon. Winds were mostly 15 knots, gusting 20 while we were out in Baynes/Haro Strait. Slowed us down a bit and then gave us a bit of surfing on the way back! Ran into Yves and Patti of Go Kayak on the way back as they were running a course and got to chat a bit with Robin who was with them.